Transitioning to Film for Family Photography 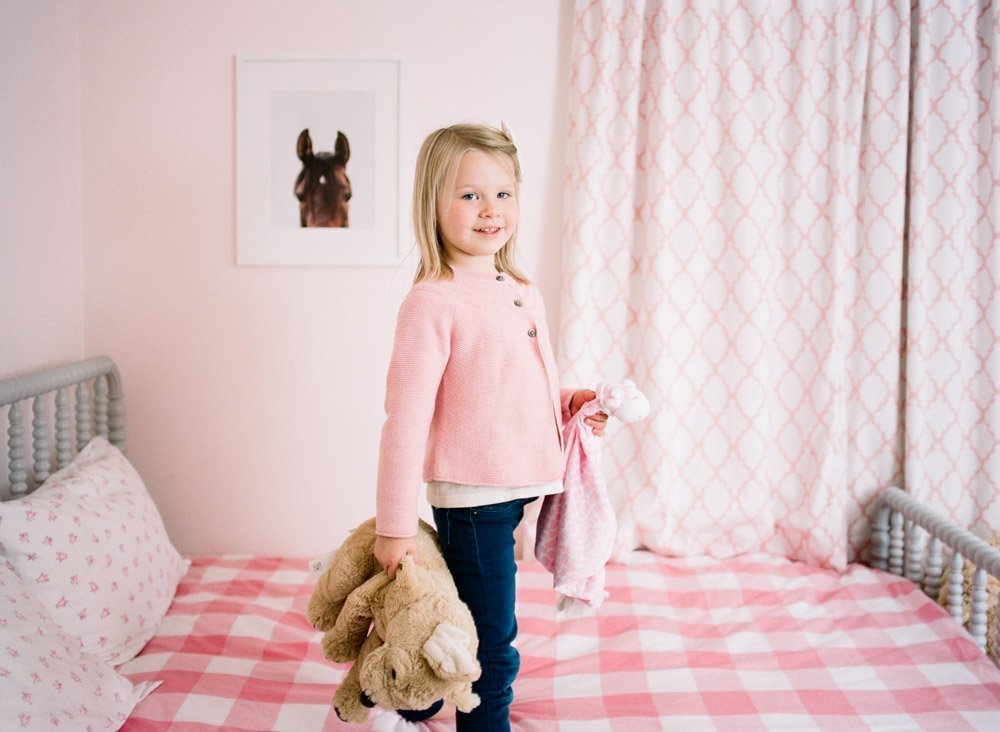 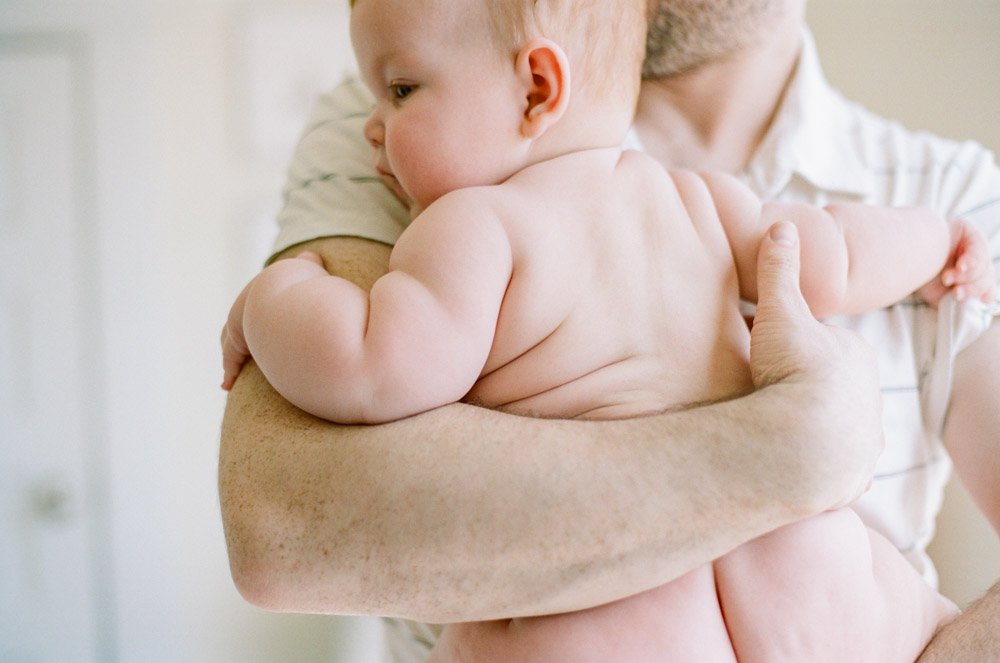 Ready for a change?  A challenge?  A kick in the pants?  Then I encourage you to try shooting film – even if you don’t switch over to film in the long run.

I made the decision to switch back to film over 7 years ago and it has changed my life and my business.  If you are drawn to the look and feel of film, there are so many benefits to shooting it!  You’ve probably all heard the buzz words surrounding film (but they’re worth a mention again here because they’re true).   I shoot with more intention. My sessions aren’t so crazy and frantic anymore.  I shoot less and still have a full and diverse gallery to present to my families.  Getting scans is comparable to Christmas morning.  I’m on the computer less and have time for more sessions and/or family time.  I spend way less time editing photos and get beautiful skin-tones and that signature Zeiss bokeh that is oh-so-dreamy.  Sure, film adds a new CODB expense with each session, but you can tweak your pricing model to account for the added expense.  The time and money savings from not having to invest in keeping my digital cameras up-to-date and spending less time per session totally make it worth it to me.

So if you love the look of film, are stuck in a creative rut, or just need a new challenge, follow these steps to give film photography a try.  Just shooting with a different camera without an LCD screen is guaranteed to help you re-invigorate those creative juices!

1. This is an obvious one:  round up a film camera and some film.  Duh.  Do you have an old hand-me-down from your parents or grandparents?  Can you borrow a 35mm SLR from a friend or neighbor?  If none of these is an option, 35mm cameras are super cheap and can be found on eBay, Keh.com, FB camera gear groups, or your local camera shop (and probably even Amazon) for under $300.  I would recommend shooting with a 35mm SLR vs. a medium format camera to start because it’s more similar to a DSLR.  You can use the same lenses (if you stick to your brand), the auto-focus is fast and easy, AND 35mm film has 36 frames (vs 120 film which has between 10-16 frames) per roll.  Now that you have a camera, you need to snag some film.  Which one do you choose?  I think the most versatile and forgiving film is Kodak Portra 400.  It was first developed for cinematography and is an all-purpose professional film which is a better grade film than a consumer drugstore brand like Fuji Superia 400 or Kodak Gold 200.  With an ISO of 400, you can shoot it in all types of light and in many different ways and it’ll look fantastic. 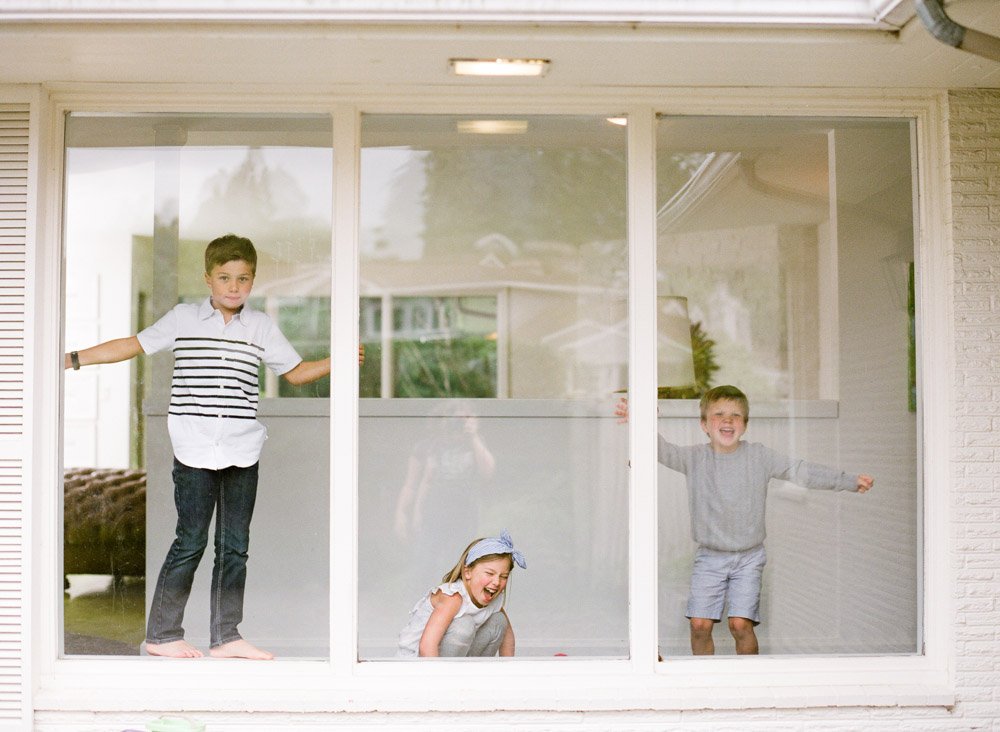 2.  Now that you have some gear, you need one additional piece of very important equipment: a light meter.  All cameras have internal metering systems and that can definitely work in a pinch.  But if you really want to give film a try, you need to meter in a consistent way.  Otherwise, without getting the feedback from your LCD screen, your film exposures can be quite inconsistent and you will get frustrated.  I use a handheld meter – a Sekonic L-358.  You can find used ones in any of the major online stores shared above.  If you can’t find one to borrow or don’t want to pony up the money, try one of these Apps:  myLightMeter Pro or LUX.  They don’t work as well as a Sekonic, but will work better than nothing.  The last resort is using your in-camera meter but make sure you know and understand how metering for film differs from digital, and use Ansel Adams’ Zone System for metering so you can achieve consistent exposures. 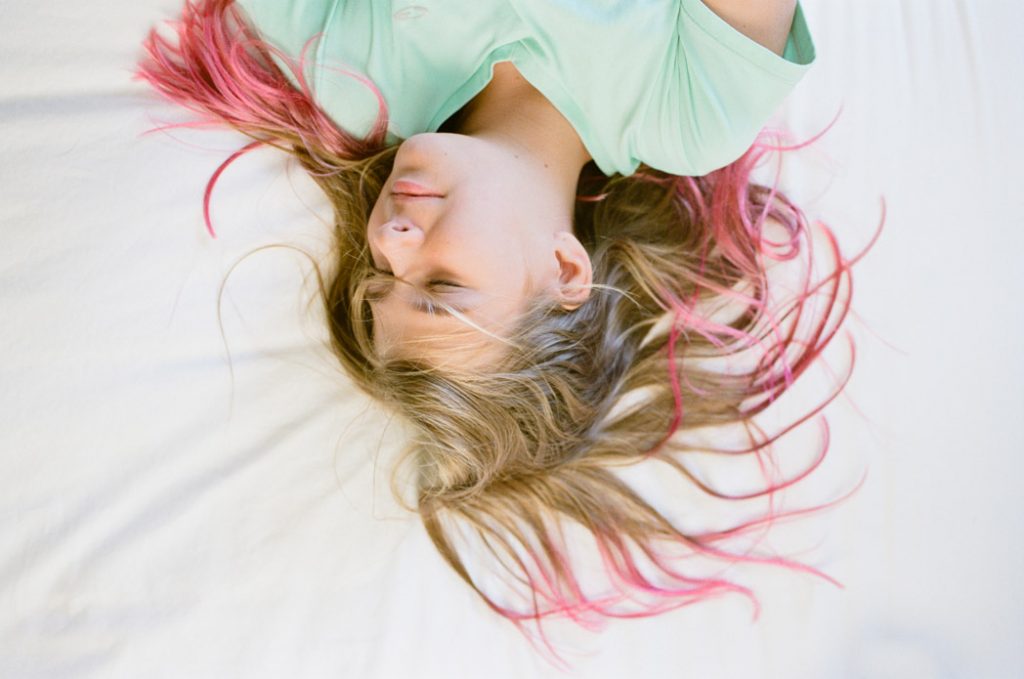 3.  Try shooting a roll of film outside with your kids, neighbor’s kids, dog, neighbor’s dog, or something of interest to you!  Why outside?  Because the light is less tricky and more forgiving than indoors.  Here are a couple of tips to get you started:  Rate your Portra 400 at 400.  Meter with your handheld meter or App meter in the shadows of your subject.  One major difference between film and digital is that film loves light.  Film can be overexposed quite a bit before the highlights are clipped, but it doesn’t handle underexposure well.  (It is the opposite of digital, where digital can’t retain highlights well and we tend to underexpose our images and bring them up in post.)  So if you overexpose your film it’ll look great, but don’t underexpose it.  Metering for the shadows will ensure you will not underexpose your image.  What do I even mean by “metering for the shadows”?  That means when you look at your subject, you find the darkest shadow on them (typically under the chin or in the shadow opposite where the light is falling) and place your handheld meter bulb out or bulb in, facing away from them towards where you will be with your camera.  Press the button and the meter will tell you what your camera settings need to be.  (Look it up on YouTube if you’re confused!)  Practice metering in the shadow on your kids, neighbor’s kids, dog, or neighbor’s dog and see if you get consistent meter readings.  Then all you do is plug those meter reading settings into your camera, focus, and snap a photo.  Easy peasy. 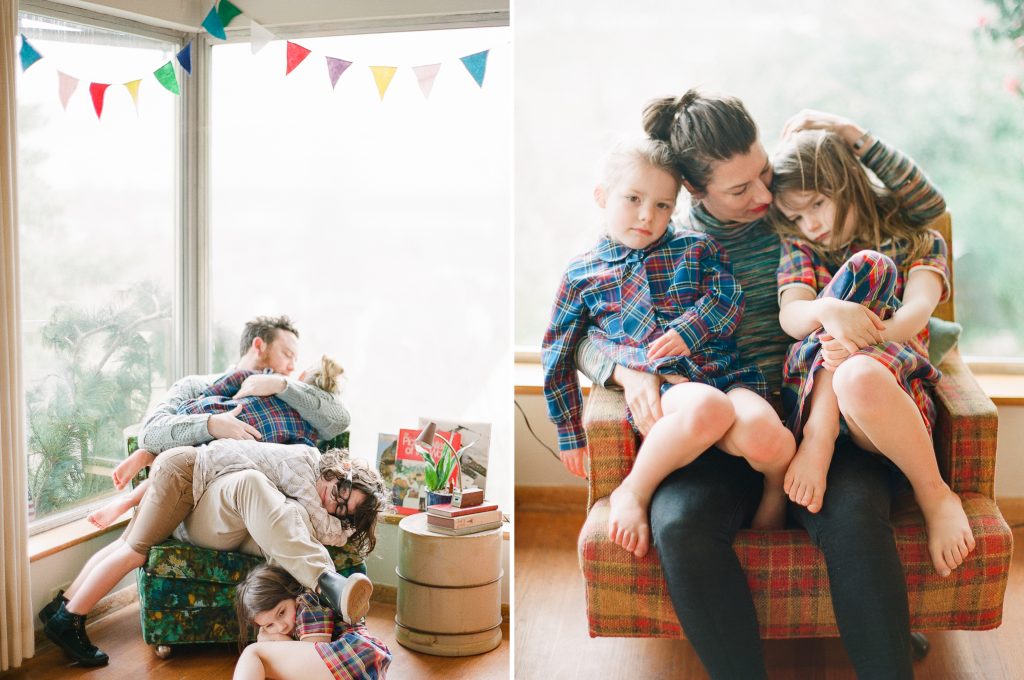 4. Take notes.  With digital, we are used to getting all the shooting data for our images.  If you love the new challenge of shooting with film and love how your first roll turned out, then take notes as you practice more!  You need to know your settings and what you did so you can learn what worked well and what didn’t work so well.  Keep track of your shutter speed, what film type you were using, the ISO you rated your film at, how you metered and where, and even the time of day and what the light was like (was it full sun, overcast, in the shade, etc.).  I know this seems tedious but it is the number one way you can learn film quickly and efficiently to really hone in on the look and feel that you’re after.  You can then get consistent results and start shooting it in your business. 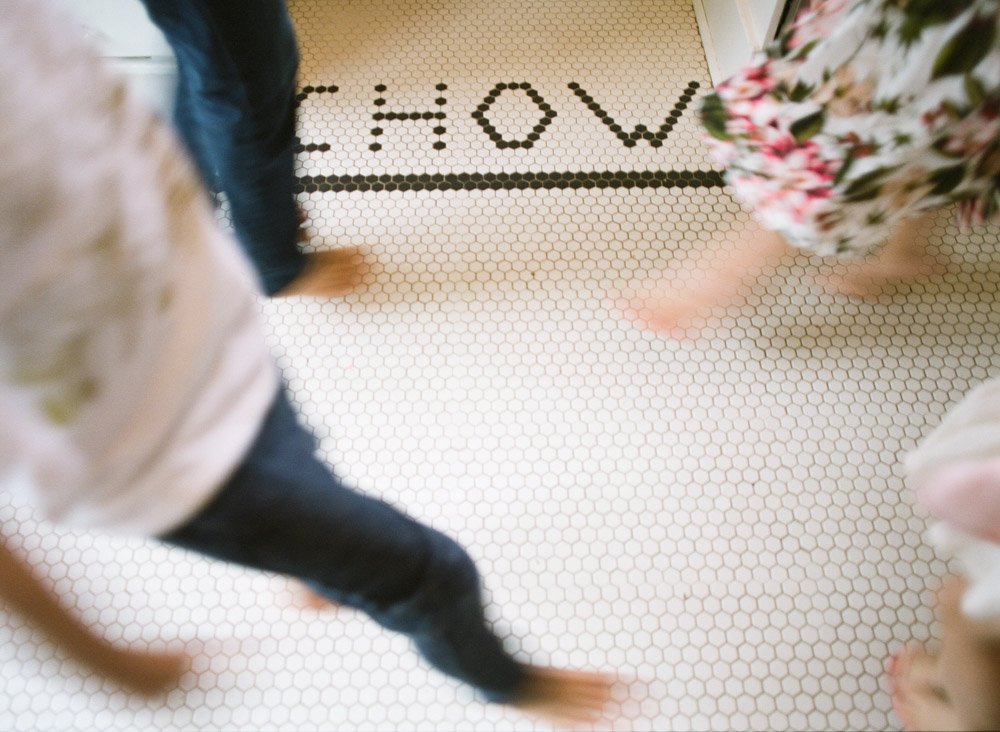 5. The last step in transitioning to film for your family photography business can take many shapes and forms, but I’ll tell you what worked for me.  When I knew I wanted to switch over, I first started shooting hybrid for my sessions.  This worked for a while until I knew I could use film for my family sessions.  I would have my film camera loaded and ready to go at the camera settings I needed, but start out the session with my digital camera to get the family warmed up (and make sure I had some use-able images!).  Then periodically, I’d grab my film camera and shoot some duplicate images.  I’d go back and forth like this.  To be 100% transparent, going back and forth with different cameras did mess with my shooting cadence and thought process a bit as I had to think differently about exposing, but it was the crutch I needed at first to see that I could get consistent exposures and focus with families on film.  When I decided I was ready to go all-in, I scheduled a couple of family model sessions and left my digital camera at home.  Yes, at home!  Don’t even bring it.  Doing a model session took the stress out of potentially messing up a paid shoot and allowed me to really slow down and shoot a variety of images with intention.  It gave me the last bit of confidence I needed to know I could shoot families on film for my business! 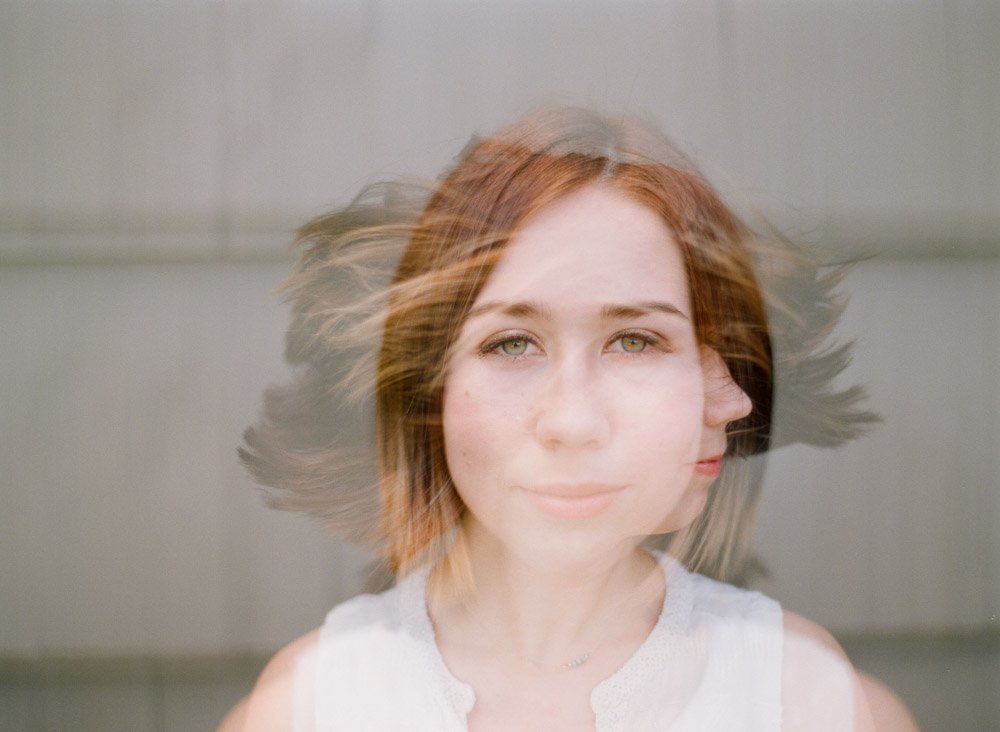 Even if you try film out and decide it’s not for your business, or it’s not for you at all, I really do believe it will be a fun challenge that will get you out of a creative rut or even a funk.  If you try it and decide you love it, there is also so much more to learn!  Film is incredibly versatile and can be shot in different ways to achieve many different looks. There are a ton of resources out there at your disposal (and even some great nuggets on my website) from tutorials, freebies, and workshop information for you to check out.  Please reach out to me if you have any questions and have fun shooting! 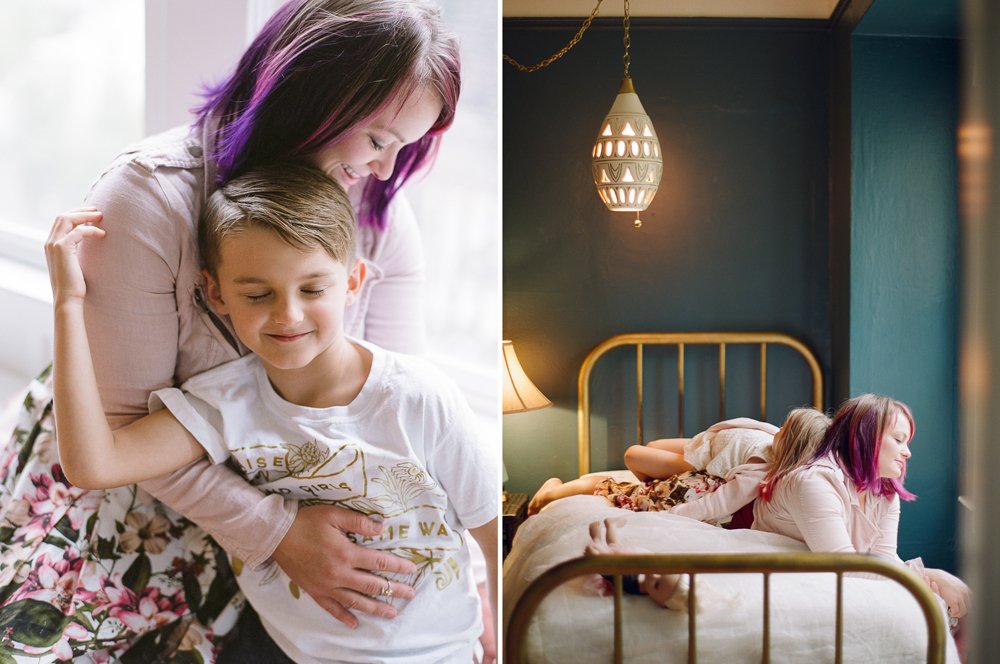 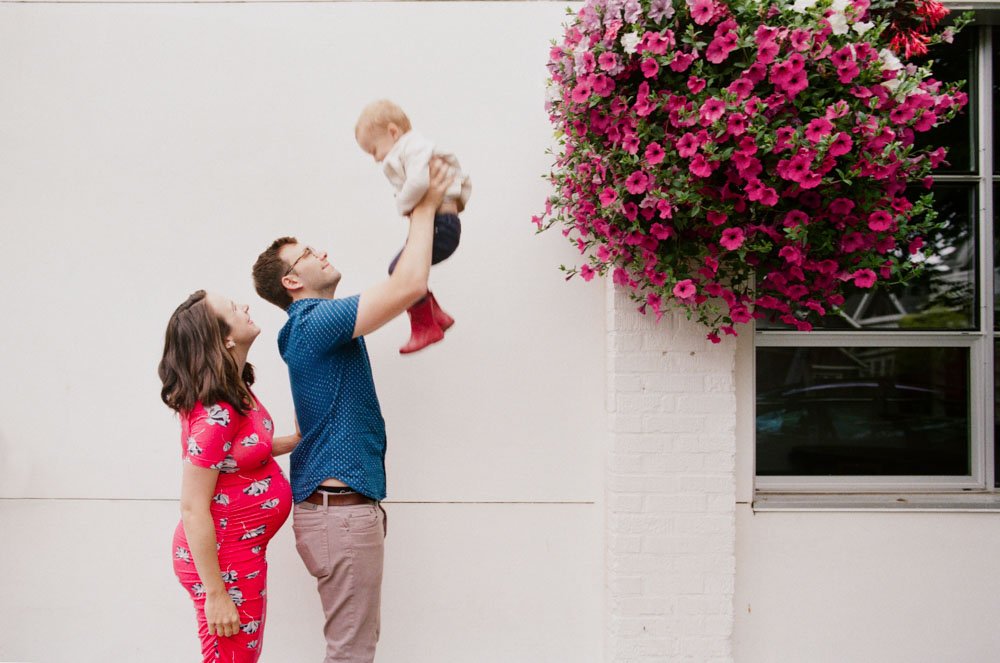 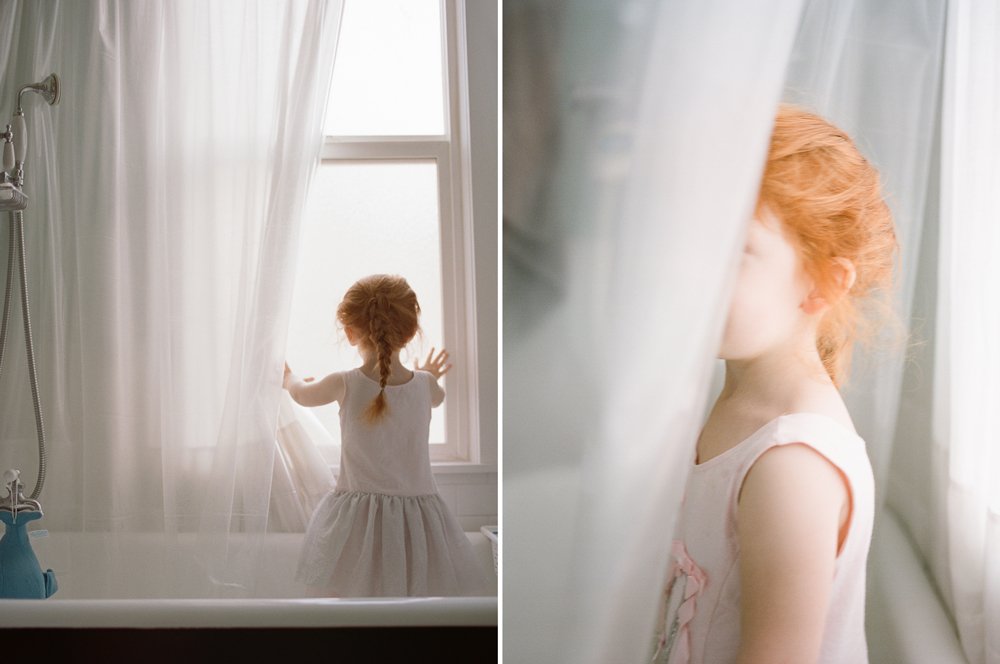 I hope you found this helpful!  Reach out to me if you’d like to learn more about starting with film!