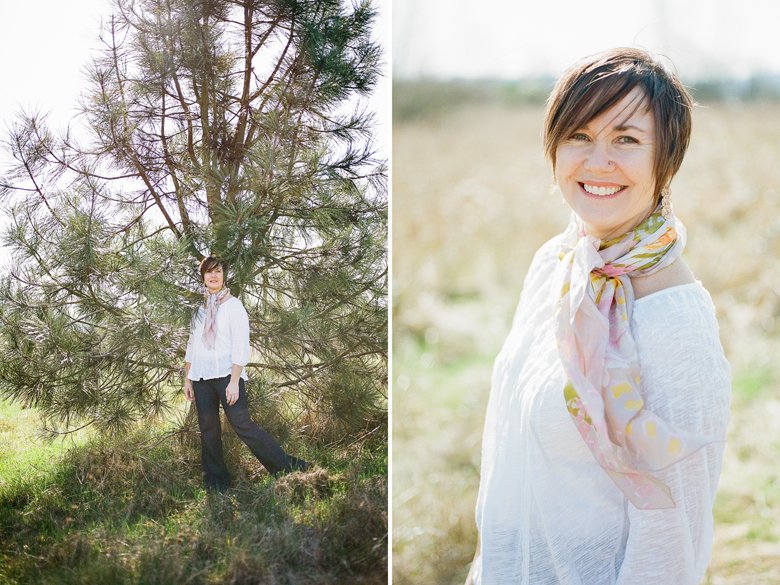 A major business goal of mine this year is to be able to photograph family sessions with film 100% of the time this Fall.  I am so completely hooked on everything about film photography – from the tonal range, the luminosity, the depth of field, the highlight retention, to the creamy skin tones!

A huge part of getting a consistent ‘look’ with film, besides picking one lab to work with, is choosing your go-to film.  Different films render colors, highlights, and shadows in different ways.

I’ve narrowed down my favorite outdoor film for shooting in Seattle (which tends to have blue/green light almost all the time) as gorgeous Kodak Portra 800 medium-format film.  I had been asking around how I should rate this in a full-sun situation.  Some film photographers said box speed, some said 640, some swore by 400, and a few even said 200!  Feeling a bit overwhelmed, I decided to do my own test.  I recruited my amazing, beautiful friend to be my model one sunny day at noon.

I shot five rolls of Kodak Portra 800 film rated at 800, 640, 400, 200; and Kodak Portra 160 rated at 160.  I shot part of the roll in full-sun and the second part in open shade to see which rating would give me the best results and best ideal shutter speeds for shooting locally.  How did I meter, you ask?  For each roll, I compared four ways to meter:  bulb-in @ 45 degrees, bulb-in in the darkest shadow of my subject, in-camera meter (+2) on subject’s forehead (I use the Pentax 645n), and the Sunny-16 rule.  I was impressed that for the most part that all four metering methods were giving me the same reading.  (All rolls were developed and scanned by Richard Photo Lab.)

This first comparison also shows how color and skin tones rendered in full sun with p800 and the last roll – Portra 160:

Comparison of Portra 800 only:

Look at how forgiving Kodak Portra 800 is!  I was blown away when I saw the results.  I really thought I would see more differences since rating the film at 200 is already two stops over box speed.   I am also amazed at how well a good photo lab can make your film scans look consistent, even when rated differently.  There is a 4-stop difference between the p800 rated at 800, shot at f2.8 @ 1000 vs. p800 rated at 200, shot at f2.8 @ 250!  So develop a relationship with and love your lab. 🙂  Please see my straight-scan comparison I added at the end of the post.

Comparison of Kodak Portra 800 only:

I found out RPL tried to match up scans from the Kodak Portra 800 film rolls into one cohesive set since all rolls were submitted in one order.  I asked them to re-scan one image from each roll and do a straight scan since I was testing exposure.  A straight scan means that the photo lab doesn’t do any adjusting.  Here are the results:

I’m still quite surprised to see there is not much difference in exposure, colors, or contrast.  I can see a difference in skin tone but that may be attributed to the difference in the color of the field.  The Kodak Portra 800 rated 640 photo was taken in an adjacent field with less green.

What differences do you see?  Which is your favorite?

I also love to rate Ilford HP5 several different ways depending on lighting conditions and you can check out the versatility of this film by clicking the link.  It’s my go-to b/w film, in 35mm or 120 format!

Feel free to check out other film-related tutorials and articles like:

5 Steps to Improve Your Film Photography

Hi! I actually want to pick up on the question from anoukk: I shoot the 800 ISO @200. Technically it is overexposed. But how should I develop it? Leave it like that (develop like 800) and the film handles the overexposure and gets this beautiful creamy colors? Or develop it like 200, so that the exposure is nailed?

What do you tell the Lab? Do you just give them the rolls and go: develop them regularly or do you let them pull 2 stops?

Hi Andrea! Thanks for your message! I would not pull two stops. If anything, I would pull one stop or develop normally, but it would also depend how you metered once you rated it. If you metered bulb in at 45 degrees, then you’re overexposing the roll even more. I know of many photographers who rate it at 200 and develop normally, but you can overexpose it this way. I usually shoot it at 400 or 640 and develop normally. I would recommend calling your lab and asking them their thoughts as I think every lab handles overexposure differently. Hope that helps!

Skintones look nicest at 400 IMO! I’ve never shot P800 but I like how it seems to have a very natural airbrushed look to skin even without doing anything. Would you concur that’s the case? I’m liking it from the perspective of a lack of post work! lol

Curious how you metered? Personally if I was shooting an overcast day I’d use the handheld incident meter next to her head and point it up at the clouds – since they are the key. But “ISO” can vary so much even on metering so it’s important IMO.

Also, have you ever used flash in a studio/multiple strobe setting with P800? Obviously it’s mostly used in natural light but the skintones have me so interested I’d like to use it in that setting…

Hi Joe, Thanks so much for your input! Yes, P800 is one of my favorite films- the warm tones seem to work well with our cool light in Seattle. I usually rate it anywhere from 400-800 depending on the circumstances and whether I’m using it outside or inside.
For color film, I meter in the shadows about 75% of the time, and that’s what I did here with these images. I incident meter in the shadows, parallel to the subject. Even though P800 has an ISO rating of 800 it’s a very light-hungry film.
Last, yes, I have used this stock a lot indoors with flash or strobe. The skin tones are gorgeous and you get some fun punchy colors. As soon as I get home I can attach a studio w/strobe image as an example for you!

Sorry for the late reply. I’d love to see that example if you have it!

Hi Joe – thanks for the reminder!! I’ll find the comparison and post it today!

I really like what you tried to show – unfortunately only your one where they did not adjust in scanning is really relevant.

Maybe it’s different for many negative film shooters now days, but I come from shooting transparency exclusively (Kodachrome at the time), and one of the biggest deal breakers for me with a lab was if they screwed with the exposure/color that was on the film from my camera.

Hi John! Thanks for your comment and input. I totally agree. However, I wanted to include the comparisons where the lab scanned for all to match, as I think it shows film shooters (not including transparencies which is a whole different ball game) how forgiving color film really is.

Is it possible to change the camera’s ISO setting “mid-roll”? Say I shot half a roll of Portal 800 at 800, then adjusted the camera to 400. Is this possible? Would I then have the film developed as if it was all shot at 800?

Hi Hannah, that’s a great question! Most people shoot an entire roll at one ISO because if you change mid-roll then either half will be underexposed or overexposed. The lab wouldn’t be able to push just half of a roll or make adjustments based on a different ISO. That being said, you could do an experiment and see what happens as long as you would be okay with a potentially bad turnout! If you try this I’d love to see your results!

Super article – Now please flesh it out by comparing with Portra 400 in the same way! I can’t find any comparisons anywhere and 400 is so much cheaper – like me!
Many thanks for enriching the internet.

Thanks so much for your feedback, Charlie! Yes, I plan on doing more comparisons but I just haven’t had time recently. Check back soon for more!

I’m so glad to find your post. I’m hooked on film as well and there’s so little info comparing things online. Your article was FANTASTIC! Thank you!

Thanks so much, Victoria! I’m glad it helped! Let me know if there are other film types you’d like me to run a comparison on!

hey i shot a roll of portra 800 at 200, should i tell the lab to pull two stops or develop it the regular way?

Hi! Great question. Portra 800 needs lots of light. I would develop the roll rated at 200 regularly. Let me know how it goes!

So did you develop the portrayed 800 at 800 for all speeds or did you pull? I just shot a roll of portra 800 at 200iso and was wondering if I should get the roll developed fr 800 or pull 2 stops. Thank you

Thanks so much for doing this and sharing your results! I’m starting to really get into experimenting with different professional films (only used cvs brand and cheap Kodak my whole life), and this really helps!

Katie, your comment made my day! I’m happy to hear it helped you! Good luck on your film journey!

I cannot get over how similar they all are!! That’s crazy!

I know, right?! I was surprised too!