How to Use the Zone System by Ansel Adams 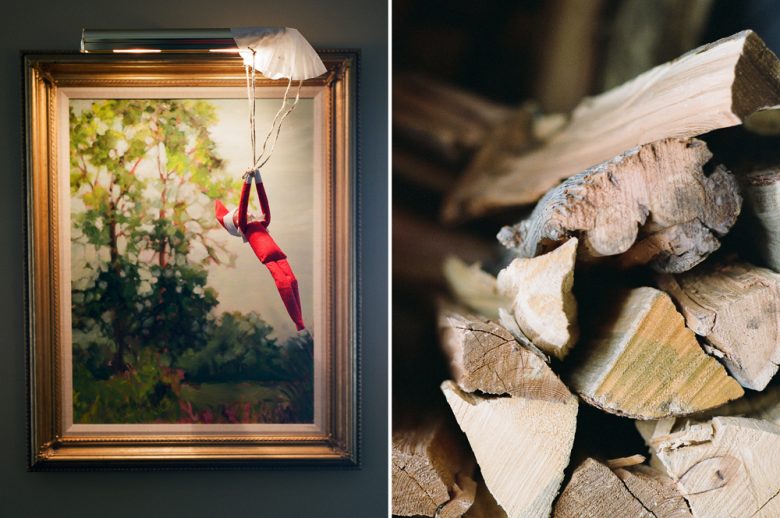 Ansel Adams’ Zone System is genius.  It’s how I learned to expose black and white film, and it’s so easy once you understand it and know how to use it.  I use it all the time while photographing personal work, both indoors and outdoors in natural light.  I’ve found that it works well for both color and black and white film, although Ansel’s system was initially set up to determine his vision for tonal values in a black and white film exposure to then create a beautiful print.

If you’re not familiar, his zone system looks like this (courtesy of Wikipedia, my best friend): 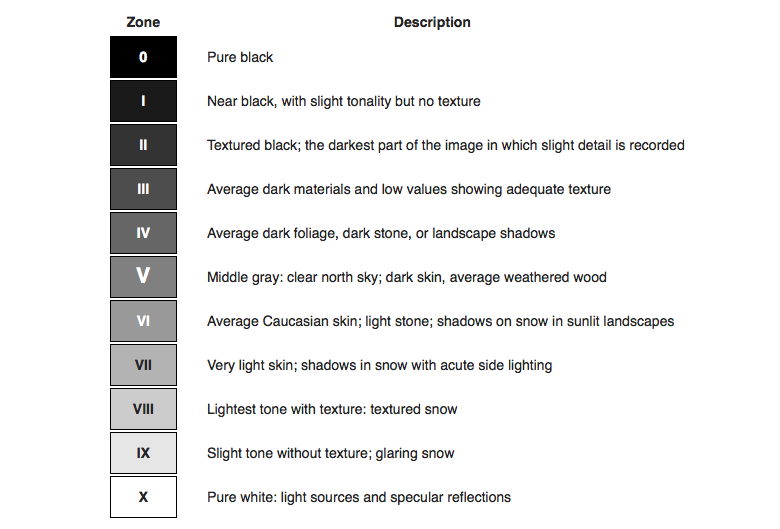 The 11 zones in Ansel Adams’ system were defined to represent the gradation of all the different tonal values you would see in a black and white print, with zone 5 being middle gray, zone 0 being pure black (with no detail), and zone 10 being pure white (with no detail).  Theoretically, each zone represents one f-stop in exposure.  You’ll also notice there is then an 11-stop difference between pure black and pure white, with a 7-stop difference between the darkest black with detail and the lightest white with detail.  That’s quite a lot of latitude to work with and one reason we love film, right?!

You might be thinking, Yeah, okay, great.  Thanks for the nerdy science/history lesson.  How is this going to help me??  Okay, ready?  What do we all know our camera, if put at ‘correct exposure’, the middle bar in your internal meter, exposes for?  White?  No.  Black?  No.  A camera’s sensor exposes for middle gray – Zone 5.  The same tone as an 18% gray card, weathered wood, or dirty concrete.  So what if you decide to take your kids sledding one day and bring your camera to take some epic, artistic film photos- and you forgot your meter?  How will you know how to expose?  You can take in-camera meter readings of the scene you want to photograph and place the important items (your kid’s faces, the snow, etc.) in the right zones.   You may be asking how you place them there?  Well, if your camera, when metered on snow, is showing an exposure value of 0, you know your snow will expose as a middle gray tone.  So you place the snow tonal value into a much lighter gray to white (zone 7 or 8, usually), by opening up 2-3 stops.  Now you will have white snow.  Before you take the photo, also do a quick meter check on your child’s face.  Your meter should show it about 1-stop down from your snow meter reading if your child has a lighter skin tone.  If you were also to meter on the black tubes, the meter should be in the negatives, indicating a dark tonal range.  My kids clearly aren’t sledding here, but you can see the range of values I’m talking about (and Isaac’s pouty face). 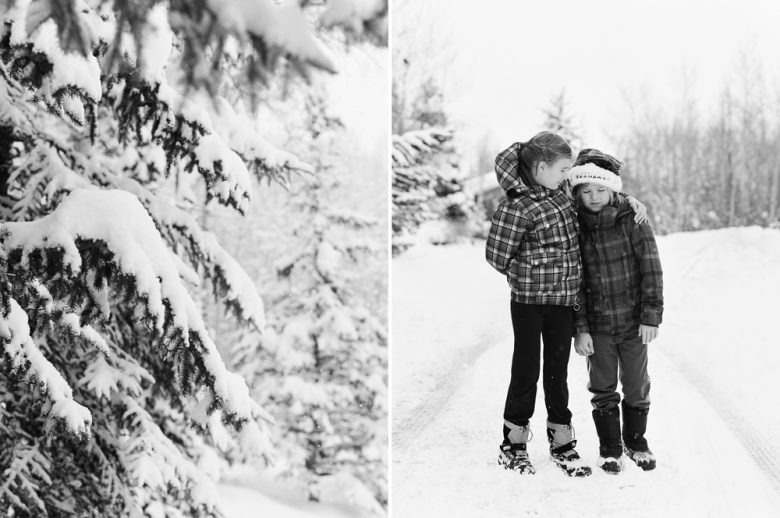 Without getting much more nerdy on you, I’ll show you some examples from my recent excursion to lovely Park City, UT.  (If you haven’t gone there, I highly recommend it!  It’s a great ski area for families.)  All the film I used (Kodak Tri-x, Fuji 400h and Kodak Portra 400) was rated at box speed.

In the photo above, I metered on the gray morning sky and on the snow on the rail at the bottom with my Pentax 645n in-camera meter.  I wanted the sky to be in zone 7, so I made sure my in camera meter read +2, and the snow to be +1.

In the photo below, taken later in the day, I wanted the snow to be lighter and brighter.  Here, I placed the snow in zone 8, +3.  It’s good to know it was overcast and snowing. Because it was overcast, there wasn’t a huge range of tonal values so I didn’t need to worry about clipping highlights or shadows as I would have had to on a bright, sunny day. 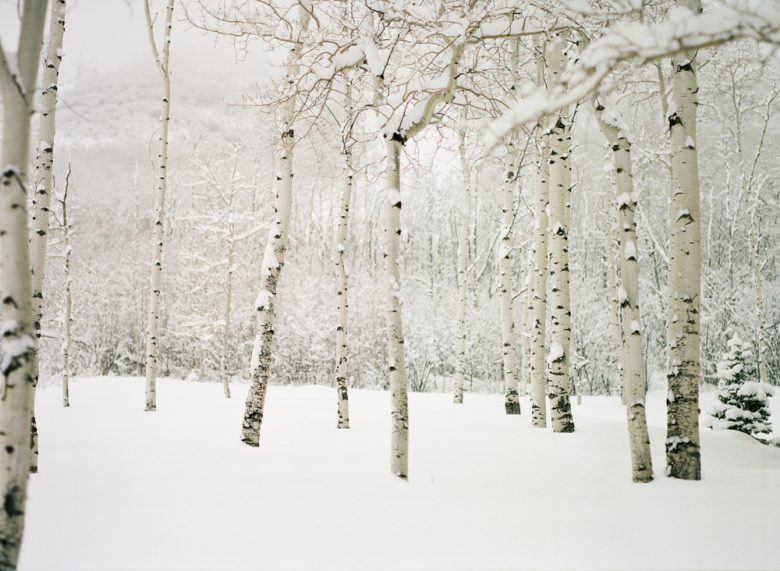 Conversely, in the photo below photographed on Kodak Tri-x 400 speed film, I had a lot of middle gray mixed with a few darker and lighter tones.  I knew if I exposed for middle gray, 0 in the camera meter, the photo would be exposed correctly. 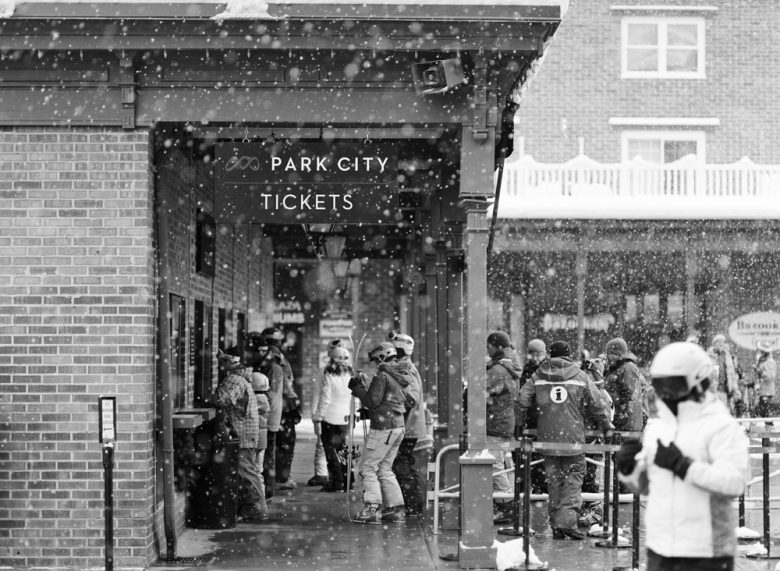 Can you guess how I metered for these two photos? 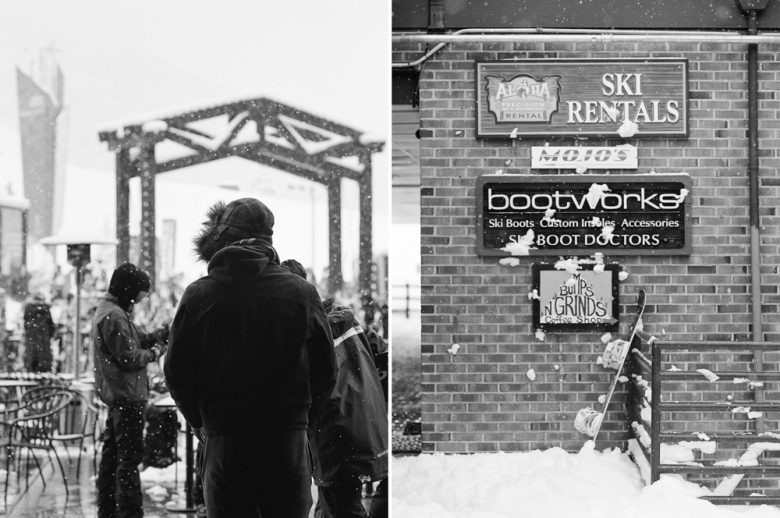 Left:  I metered for the sky, +3, then metered his jacket and made sure it would have detail (not zone 0).  Right: Metered for the brick at middle gray.  Made sure snow was +3.

What about this color photo? 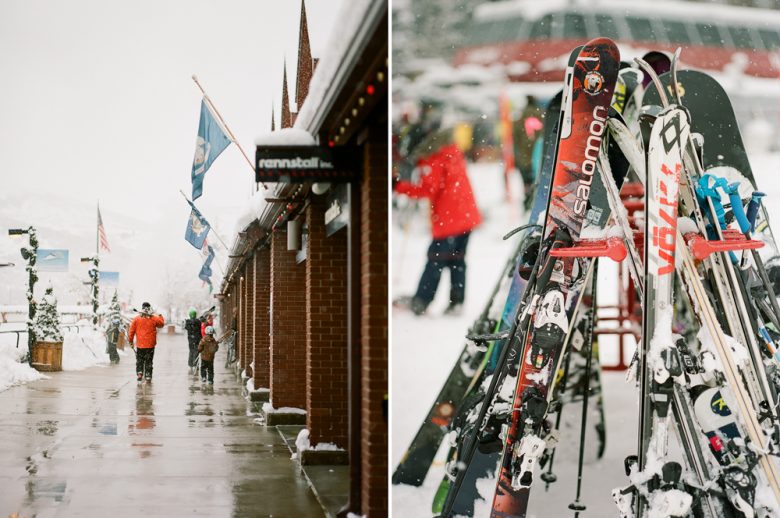 Same thing!  Left:  Metered for the concrete sidewalk at middle gray and checked the other values around it.  Right:  I had quite a mixture of tonal range in here, so usually in this situation all tones will equal out to a middle gray tonal value.  If you keep the camera meter at 0, you’ll likely have a good exposure.  I overexposed anyway just to make sure, especially since I was using all forgiving color film.

I have two more scenarios to show you. 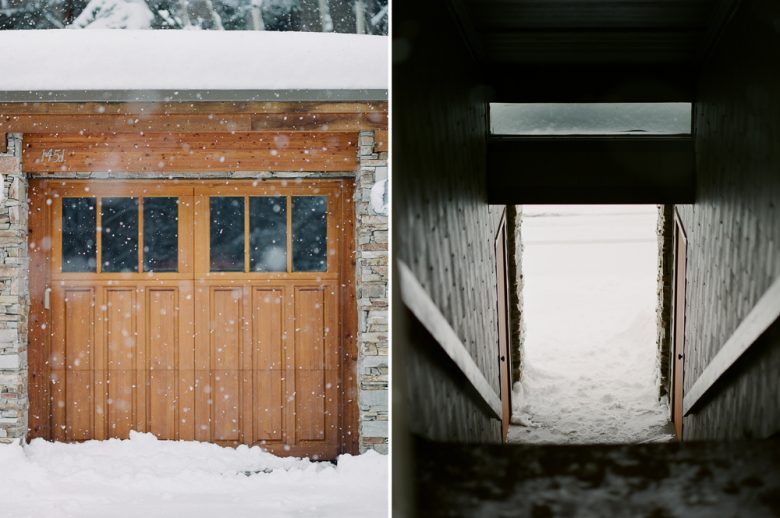 What do you think I did on the right?  I wanted to be able to see detail in the snow at the bottom and create a dark tunnel, so I overexposed the snow +2.  I did want to make sure I didn’t lose much detail in the blacks but I didn’t care if I lost a little.  What about on the left?

Last, here are a couple indoor shots with Fuji 400h film rated at 400.  I metered exactly the same way.  For the elf, I wanted to expose the highlights correctly and show the glow of the light, so I metered for the highlights +2-3 and checked the tonal values of the red suit and the painting.  I didn’t care about the wall.  For the right, I wanted to show depth.  I wanted the shadows to drop off, so I metered for the end of the wood and exposed +2.

Do you see a pattern here?  Through most of these examples I overexposed 2-3 stops, placing key items like snow, light, and skin tones in zones 7-8, all on an overcast day.  If it was sunny out, you would see a wider tonal range in your scene.  With black and white film especially, if the sunny tonal range is over 7-stops, then you’ll have to choose whether you want some loss of detail in the highlights or in the shadows.  You will have to decide what is the most important range you want to expose for?  Are you okay with losing a little detail in the shadows or the highlights?  Alternatively, you can choose to compress the tonal range by adding light to the shadows via a flash or reflector or finding a way to darken the highlights (using a scrim, perhaps).

I hope this was helpful and de-mystified the Ansel Adams’ Zone System for you.  I encourage you to try using it on your next excursion!

If you’re interested in reading up on other film-related things, feel free to check out a post about rating Portra 800 four different ways and also how I use bounced flash with film here!